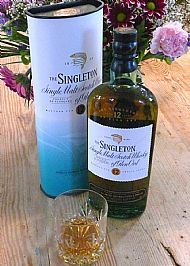 The parish of Urray, in which Druimorrin lies, was hoaching with small stills up until the 1820s when the government brought in a series of Acts to stamp down small-scale (and difficult to tax) distilling. The end result was that the smaller stills gradually disappeared and the Ord Distillery emerged, just a mile and a half from Druimorrin.

This happened during the time popularly known as the "Highland Clearances".  Parishes around Urray were being 'improved' by being cleared of small-scale tenant farmers and mailers to make way for sheep 'walks'.  Nearby Strathconon was the location of some of the most notorious enforced Clearance, but the proprietors in Urray invested in other ways to improve the financial return from their property.

The proprietors in this area chose to create a market for the grain produced and carry out different sorts of land 'improvements', including the drainage of boggy marshland to create viable fields.

Nowadays, we have the award winning Glen Ord single malt, with fascinating distillery tours, a modern visitor centre and of course the chance to sample the whisky.  All ages are welcome in the visitor centre and children aged 8 and over can go on the tours.

The Glen Ord Distillery was founded in 1838. Its soil, the barley, the sea air and the marvelously soft water that imparts Glen Ord Single Malt Whisky with a 'Flavoursome roundness,' which has earned this unique spirit the International Wine and Spirits Competition '94 & '95 Gold Medal for the world's best single malt and the '96 & '97 Monde Selection Awards. It is known as the 'Richer Malt' from the Black Isle in the Northern Highlands.

The history of Glen Ord is entwined with Scottish lore and the MacKenzies of Ord. The distillery was prized by other distillers for its unique characteristics long before becoming available worldwide. Its impressive reputation is firmly established in Scotland - especially among blenders who included Glen Ord to add a premium note to their whiskies.

Unlike other single malts, much of Glen Ord's distinctive flavour profile is due to the distillery's unique twin water source known locally as 'The White Burn' which includes pools fed by rainfall as well as from spring water.

Uniquely among whiskies, the barley is grown right on the Black Isle and specially malted adjacent to the distillery. The flavour of Glen Ord lacks the "burn" often associated with single malt, while offering a mellowness and sociability that makes it particularly appealing.

Glen Ord's 'Singleton' is not generally available in Great Britain and the distillery shop is one of only a tiny handful of outlets where British buyers can obtain a bottle.  Online, rare bottles of Glen Ord's previous editions fetch up to £1,500, while the now-discontinued square 'decanter' bottle, which was available in local shops here up until only a couple of years ago, fetches around £60.